Présentation of my astrophoto plateform

This page presents my platform to make astronomical photos

Most hardware components are shown in the schematic diagram below and are also described in the "Equipment" part of this website.

The various software used by this platform dedicated "astrophoto" are shown in the schematic diagram hereafter.

Finally, an example of acquisition session is proposed at the end of this page via a desktop screenshot that can see the human-machine interfaces (HMI) 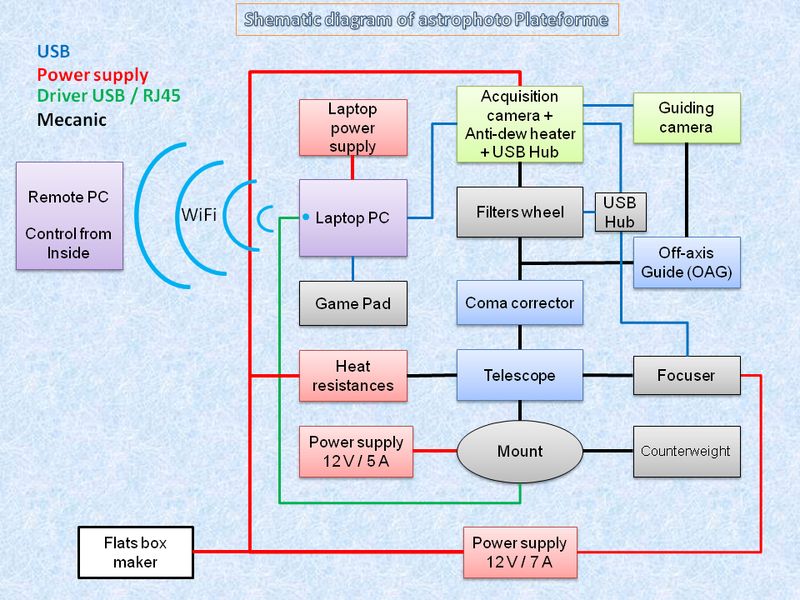 Description of the schematic diagram of astrophoto plateform :

This scheme brings up the types of connections between the components in a different color : power supply (12V), USB cables, USB cables "driver" for interfacing with other equipments and mechanical assembly.

It also appears, in a different color, the types of materials used : Electrical, mechanical, imagers, correctors / filters and CCD sensors. 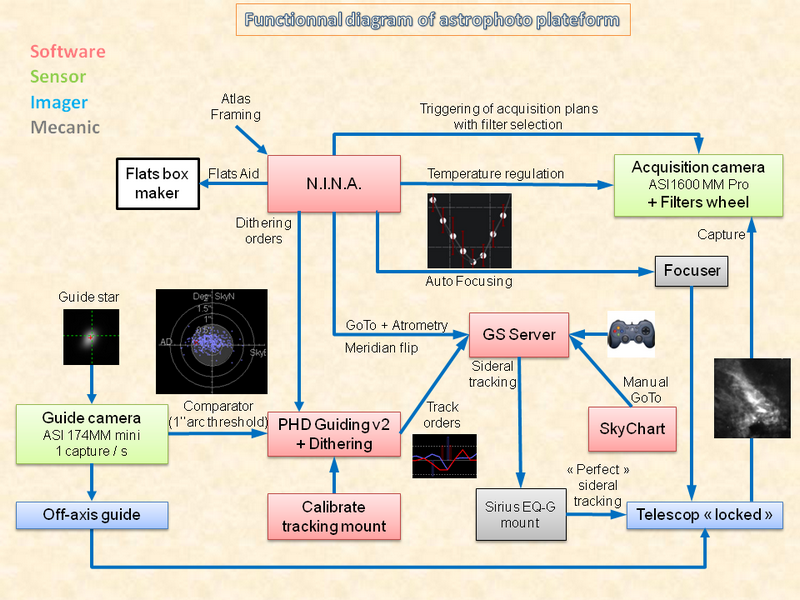 Description of the functional diagram of astrophoto plateform :

This diagram shows the general operation of the plateform that allows long exposures on an object that remains fixed in the imaging field through a servo based on a guidance system.

The mount is aligned with the North pole and with the sidereal tracking mode switch on. This monitoring is noisy essentially with games gears and mechanical bending of the whole assembly. The consequence of this noisy tracking is that the object moves around a mean value, and will therefore be blurred on a picture taken with a long exposure time (average of 5mn)

To remedy this, we must set up a servo that will be able to reset periodically the object to its original position (shifting). The system used here is based on a parallel refractor mounted on the telescope that will capture at a rate of 1 frame/s a a guide star close to the object to be imaged using a CCD camera. The control is realized with the Guidemaster software that compare the current image of the guide star to the previous one and send, if necessary and according to a predefined threshold, orders in RA / DEC to the mount in order to reset the telescope and thus guiding telescope on the initial position (before starting the homing, Guidemaster has to model the "gross" tracking of the mount by calculating the RA and DEC vectors and the DEC game)

The sharpness of the long exposure imaged object will strongly depend on the quality of guidance (good sampling, proper adjustment of the thresholds) but also on other factors such as the level of atmospheric turbulence.

The long exposure control is done from a choice of 2 tools that depend if you want a small shift between each snapshot or not: EOS Remote or Guidemaster for dithering mode (the dithering corresponds to a movement of a few pixels via an order to the mount that reduces noise frames that are identical in each image during the registration phase pretreatment)

The guidance commands sent by Guidemaster are filtered through the "Pulse guide" mode of the EQASCOM software interface that allows a softer guidance. 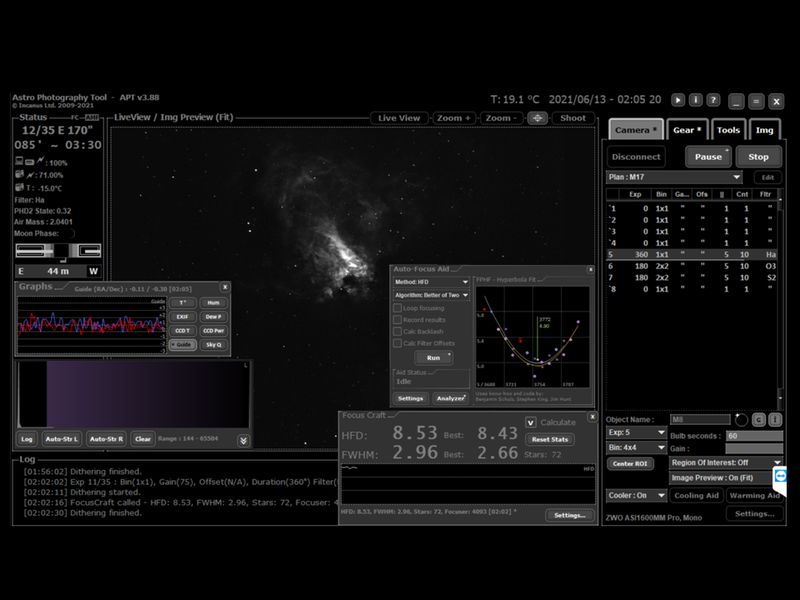 Example of acquisition session with guidance

Description of the example of acquisition session with guidance :

This screenshot shows the different human-machine interfaces (HMI) used to configure, activate and monitor the guidance and the long exposures control.

The main interface correspond to the "Guidemaster" guidance software that follow-up the corrections sent to the mount with a target showing the various position errors of the tracked object from the initial position (center target). The tracking quality criterion is customizable but if you want a good track, it is best to have all the "impacts" in a target set to maximum 2.5" arc (for information, we can never drop below the 1" arc threshold because it corresponds approximately to the disturbance of air turbulence from the CCD sensor and the tracking would be continually locked on turbulence !)

This example shows the difference between gross orders generated by the Guidemaster tool and the orders sent to the mount via the "Pulse guide" mode of EQASCOM interface that are filtered and allow a smoother guidance (prevents the "yo-yo" guidance) You can also see that the corrections are substantially on the RA axis: if the frame was perfectly aligned with the Earth's rotation axis, corrections on the DEC axis would be null and therefore the best guidance quality you would have !)

A little trick that allows better guidance on the RA axis is not to perfectly balance the payload on this mount axis: in order not to try to catch the game of the worm constantly, it is better to have the cog-wheel always support to the payload side for West tracking and vice versa for an East tracking (imbalance in favor of the payload and not to the counterweight side for a West tracking)

The long exposures programming interface (here EOS Remote) shows the progress and therefore the estimated time before moving on the next captured object (and have some sleep during that time ;-)